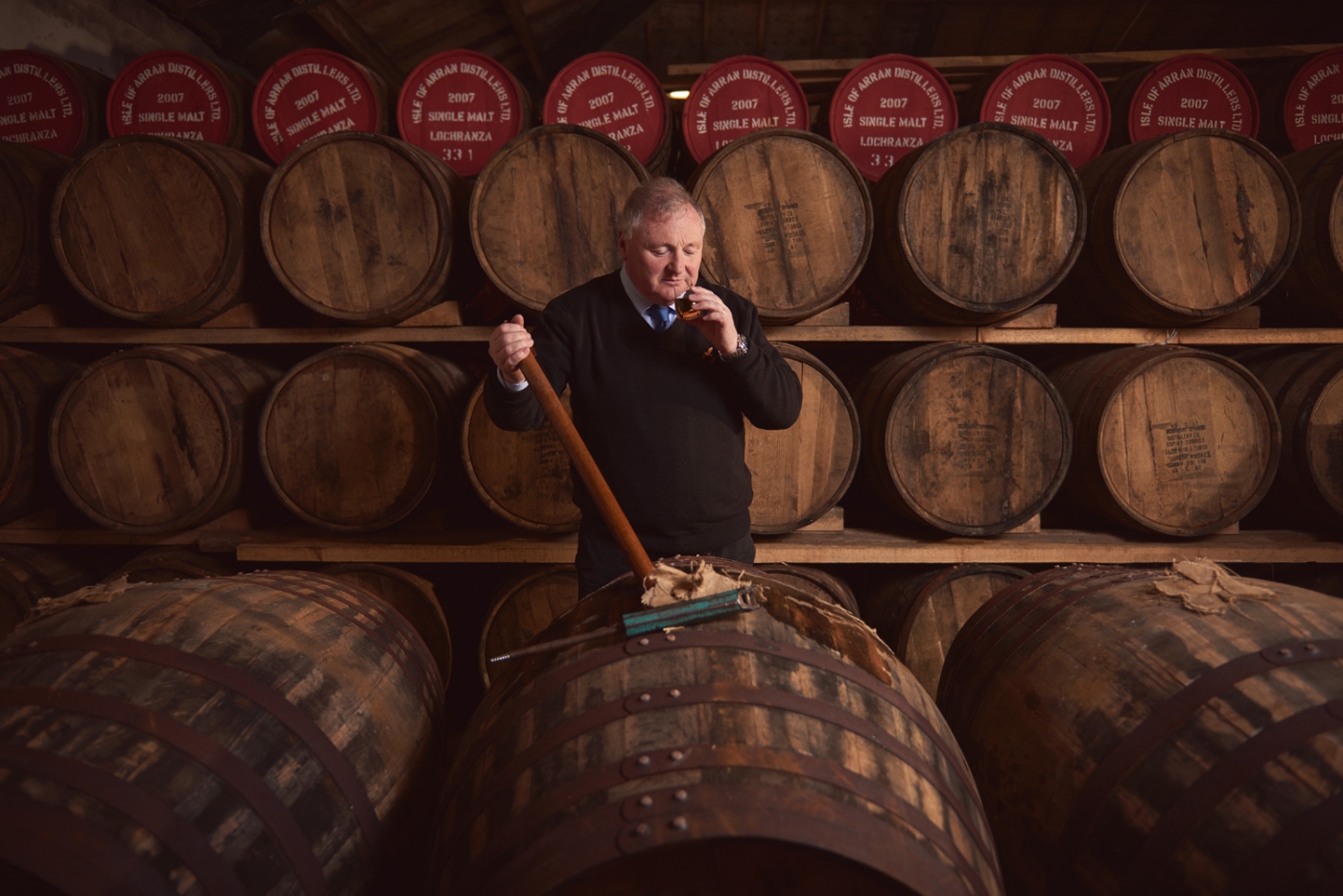 In my opinion, distilling whisky is a fine art. Quite magical as well; creating something so sophisticated with just water and barley. How do they do that?

In this blog I will tell you all about the steps of making whisky; from raw materials, to malting, mashing, fermenting, distilling, and finally maturing.

Poor yourself a wee dram, sit down in a comfy seat and enjoy!

It all starts with one thing, OK, three things: barley, yeast and water. These three materials form the raw ingredients for whisky, distilled anywhere in the world. The nature of water distilleries sourced was once deemed key to the style of their whiskies, but is now doubted, and some believe water temperature in the condensers affects the spirit’s texture.

The first stage of the malting process starts with steeping the raw barley for 2 to 3 days in cold water. The water is drained and refreshed for a few times. During this stage, the water content in the barley grain rises from 12% to 44%. The next phase is malting the barley.

Scottish distilleries, who malt their own barley, spread the steeped grains on a malting floor in a 30 centimeters thick layer and let the grains sprout at a constant temperature of 16°C/61°F . The maltmen then turn the sprouted grains with a malt shiel to prevent the roots from clumping together.

The germination process can take up to 4 to 12 days, depending on the humidity, temperature and airflow. Once sprouted, this so called ‘green malt’ is ready to be dried  in a kiln to stop the germination. Kiln drying is the simple process whereby hot air is blown through green malt through thousands of tiny holes in the malting floor.

Below the malting floor is the kiln that is mainly heated by burning cokes. However, most distilleries on Islay, burn peat in their kilns to dry the barley. The peat smoke seeps through holes in the malting floor and imparts its distinctive peaty flavor to the grain. With a risk of stating the obvious: the longer the malt is exposed to the peat smoke, the peatier the whisky will be.  – You can find more about peated whisky here.

The germinated and dried grain is now milled to form a coarse grist and is then mixed with hot water (69°C/156°F for malt whisky) in a mashing machine – this mixture is called the mash. Mixing the grist with hot water activates the enzyme amylase. This enzyme converts the starch in the grain into sugar.

The mash then falls into a mash turn, a cast iron or stainless steel vessel fitted with stirring occasionally equipment and a perforated base, through which the liquid extracted from the mash is recovered. This clear and sugary liquid, the wort, is now ready to be fermented.

In relation to flavour; a cloudy wort make a malty spirit, while clear wort allow more floral and fruity notes to emerge.

The husks and spent grains left after mashing is completed, are fed to cattle and is called draff.

FACT – All distillers understand the importance of milling the grist right, otherwise the amount of wort that can be extracted will be reduced, and so too will the amount of alcohol. If the grist contains too much flour, it may turn into sticky porridge and choke the mash tun.

The mash is now left to ferment. It is cooled and pumped into a fermentation vessel called a washback or fermenter. Although traditionally built from Douglas fir or cypress, many modern washbacks are now made from stainless steel.

Yeast is added and after a couple of hours the yeast starts to consume the sugars in the wash, converting them into alcohol and carbon dioxide. The bubbles are being broken by revolving rods in the wash back and after 34 hours the yeast cells die off, which lowers the acidity in the wash and a secondary (malolactic) fermentation starts. During this stage, the whisky’s complexity and fruity/floral characteristics develops.

Once fermented, the wash is about 8% ABV, like a strong beer. When pumped into the first still, or wash still, the contents are brought to boil and simmered to separate the water and alcohol (alcohol vaporizes at 78,3 °C/173 °F). The still operator checks the temperature from time to time to make sure that the vapor contains mainly alcohol; a higher temperature means that the vapor contains more water. The resulting spirit, called low wine (22% ABV), is collected and contains undesirable impurities (foreshots) which will be removed by further distillation in a second still. After the second distillation, this spirit  (the heart) is now at 70% ABV and is saved for maturation.

The pot still is the traditional still for malt whiskies and made from copper. The purity and character depends on the amount of contact the alcohol vapor has with copper: more contact leads to a purer, lighter and less-characterful whisky.

Since 1916, a spirit is required to be matured in oak casks for a minimum of 3 years before it can be called whisky. Except in the USA, where 2 years of maturation is allowed.  But please keep in mind, that it is not necessarily true that the whisky or bourbon always tastes better when it has matured for many years: a 3-year old whisky could taste as good or even better as a 25-year old whisky – it all comes down to your own liking.

Traditionally, the favored casks were made from oak and post-1990, this became the only wood allowed. Nowadays, most whisky distilleries use ex-bourbon or ex-sherry casks;  the first incumbent (bourbon, sherry or even wine), seasons the wood. Again, American distillers are the exception since bourbon and rye whiskey must, by law, be matured in new oak casks.

FACT – A brand new bourbon-cask costs about 330 Euro/390 USD and a ex-sherry casks costs around 900 Euro/1075 USD. This is why the casks are re-used, mostly 2 or 3 times, since the casks are the most expensive ‘ingredient‘ of a bottle of whisky.

The cask’s interior must be toasted first to mature its contents. Toasting transforms the structure and composition of chemicals below the surface of the wood: hemicellulose and lignin in the wood degrade with heat to produce caramel, coconut and vanilla flavors. American casks are ignited, to line the interior with charcoal, which acts as a purifier by removing sulphur compounds from the spirit.

After maturing for at least 3 years (or 2 in the USA), the liquid will be filtered to remove tiny wooden particles from the cask with a mechanical (steel, cellulose or nylon filter) or through a charcoal filter before bottling. Some distilleries even color the whisky with caramel (E150a) to give it a darker color.