Whisky is becoming a more popular drink worldwide. Friends who plan whisky tastings together, more restaurants and bars are promoting whisky along with food pairings and new whisky brands and types are introduced regularly. You name it! Also societies around whiskies are becoming more of interest and are getting more members.

Keepers of the Quaich 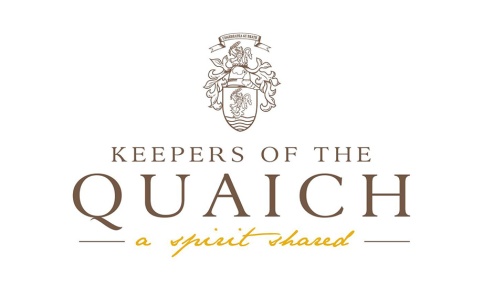 The Keepers of the Quaich was founded at the end of the 1980’s by James Espey and other prominent people from the whisky business to create a global network to promote und uplift global sales of scotch whisky. The other reason of its foundations lies in the fact to unite Scottish folklore, the passion for scotch whisky and a certain exclusivity under one single roof.

A quaich is a traditionally Scottish drinking vessel and were originally made from wood and not until the 17th century did they start to be manufactured in silver. The quaich was used for whisky and in the 19th century, even Sir Walter Scott poured his drams in silver quaichs.

Membership is by invitation only with existing members putting up nominees for management committee approval. It is believed that the Keepers have around 2.500 members worldwide in more than 80 countries.  First you become a Keeper and after at least 10 years of being active for the society in a prominent way, you can be honored by becoming a Master. The rank of Master was only created some years ago to honor long-time members.

Blair Castle, the domicile of His Grace the Duke of Atholl, is the location where the Keepers host their bi-annual banquet (of course with haggis and whisky). During the ceremony, which is not open to the public, the new members are introduced to the Grand Masters and the Chairman of the Society who calls the new members forward to swear allegiance to the rules and aims of the Keepers by placing their right hand on the Grand Quaich, a giant sterling silver quaich.

The Keepers of the Quaich have their own coat of arms and tartan. The tartan design dates back to the 1700’s. The tartan colors are blue, which stands for water, gold for barley and brown for peat. As you all may know, these are the main constituents for scotch whisky. 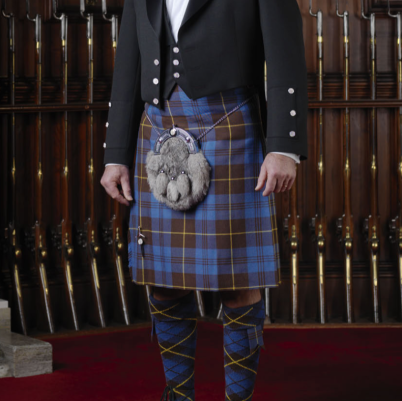 Tartan of the Keepers of the Quaich. 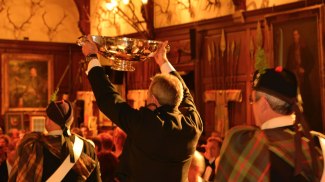 The Grand Quaich is carried into the Grand Hall of Blair Castle during a banquet. 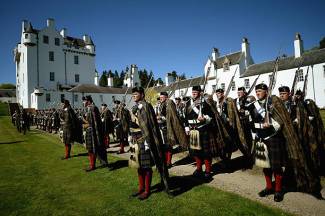 The Atholl Highlanders at Blair Castle.