The new make spirit is a clear liquid that comes from the distilling process and must be matured to get color and flavor. There are however lots of different factors that go into creating the final flavor of the whisky that comes out of the cask. This section elaborates on the following factors:

Only four of the roughly 200 types of oak are most prevalent for maturation of wine and spirits, each with different levels of lignin, cellulose, tannins and hemicellulose.

Oak is made up of 4 basic flavor compounds: tannin, lingin, cellulose and hemicellulose.

Tannins – Tannins are bitter and stringent; compare it with chewing on a piece of leather. As unpleasant as that sounds, bitterness in small doses is highly important for both flavor and protecting a tree from bugs and insects, attracted by sweetness. American oak has only 1% tannins whereas French oak can be as much as 8-10%. Tannins from the wood contribute to the mouthfeel of matured spirits.

Lignin – Lignin forms part of the tree’s cell walls and comprises a quarter to a third of the dry mass of wood and contributes a similar proportion of the flavor oak imparts. Most vanilla used in cooking doesn’t come from the vanilla bean: rather it comes from lignin which is industrially processed to make vanillin, cheaper vanilla substitute.

The vanilla flavor in the lignin adds complexity to the savory flavor of the spirit without impacting on the flavor, but if too freely added then it will stifle other flavors.

Cellulose – Made from a long chain of sugar molecules, cellulose is often described as the skeleton of a tree. A cask weighing 100 pounds will comprise for 50% of cellulose. Cellulose fibers in oak are bound in lignin. Toasting and charring the cask’s interior breaks down the lignin, releasing the cellulose, vanillin and other compounds.

Hemicellulose – Out of that same 100 pound cask, 25% will be hemicellulose and that’s where the sugars are. Caramel, basically burnt sugar, is very appealing to the human palate and when a cask is toasted or charred this produces that desirable caramel flavor, which in turn will be imparted into the spirit.

Lactone – Another vital chemical found in American white oak is lactone, in particular coconut lactone.  This lactone is also added to sun cream to give it a tropical smell.  American oak is known for having a sweeter toasted character than European oak which does not contain lactone.

White oak, unlike other woods, adds the organoleptic properties of vanilla, caramel, spice, smoke, coffee and mocha, coconut, all depending on the exact make up of hemicellulose, tannin and lignin. Other substances in the wood also contribute; eugenol contributes to the spicy aromas.

The shape and size of a cask will greatly influence how the contents age and develop. Smaller casks have a greater surface area to liquid then larger casks which leads to an accelerated maturation affect.

Most people tend to call wooden casks barrel, but a ‘barrel’ is a particular size and shape of casks. The US whiskey industry’s use of the 180 to 200 liter barrel has made this the preferred shape and size of cask used today. The dominance of this so called American Standard Barrel (ASB) is aided by the regulations regarding the production of Bourbon whiskey – which only permit the use of new charred white oak barrels. Many other distilleries then re-use these ex-bourbon barrels to mature other types of whisk(e)y or craft beers.

The following list of cask types indicates their average capacity:

After the first maturation period has completed, the cask will be emptied and refilled, so becoming what is known as a refill cask. However, after each refill activity reduces as the charcoal layer starts to become saturated with the extracted compounds from the whisky. The cask will also be losing some of its own flavors with every fill. A good cask is capable of another two fillings and maturation periods (3 in total) before it stops contributing and is then exhausted.

Due to the high costs of casks, some distilleries rejuvenate these exhausted casks by flaying, scrapping or routing back the interior surface to new wood. After that, the interior will either be re-toasted or re-charred. After rejuvenation, casks are capable of sustaining a further 3 periods of spirits maturation. Rejuvenated casks tend to produce a spicier whisk(e)y.

The layer of charcoal inside a cask from toasting or charring, mellows the spirit by absorbing sulphur and other undesirable substances. The degree of char will obviously the color and flavor of the contents. The degree of cracking caused by charring also allows a spirit to mare easily reach sugars in the subsurface below the charred layer.

Time is the most evident variable of the maturation process. We are all familiar with looking at a bottle to figure out the age statement. However, the older doesn’t necessarily means the better. Without knowing the other variables such as the type of cask used and the grade of toasting/charring and the circumstances in the warehouses, it’s almost impossible to say if it is a good whisky or not just by looking at the age statement.

Before spirits are filled into a cask to mature they are usually diluted to 63,5% ABV. This is standard in the Scotch whisky industry. The lower the maturation strength so the better the extraction of tannins and sugars. Stronger spirits tend to extract more lactones (flavors of coconut and butter). Some malt distilleries fill their casks with a stronger spirits (> 63,5% ABV), so they need a smaller volume, less casks and less labor.  Scotch grain whisky is vatted at 67-68% ABV and Irish whiskey at 71% ABV. Bourbon and Straight whisky is vatted at a maximum of 62,5% where Canadian whiskies are tatted between 68-72A% ABV, but 78% ABV is also a possibility.

The warehouse and sellers used to store maturing casks vary from caves to underground bunkers and large buildings built of masonry, wood or tin sheet-clad timber. They can be anything from single level  buildings, or dunnage warehouses, with casks stacked 2, 3 or 4 casks high (stows) to palletized buildings, so called racked warehouses, as high as the reach of fork lifts and modern robotic systems. In a racked warehouse temperatures between the top and the bottom floors can differ by as much as 40ºC (104ºF) and on what level a cask is stored greatly affects the flavor of the finished product. The top floors of these buildings are dry and hot and here casks evaporate water quickly, so gain a couple of per cent in alcohol strength. Conversely the bottom floors are cool and moist so here casks evaporate more alcohol than water so lose strength. This effect is controlled by constant rotation of the casks from the bottom to the top floors. 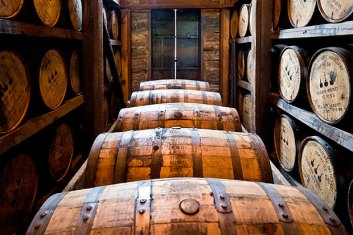 Heat expand the wood of the casks and the spirit stored inside causing it to seep into the pours of the wood; conversely when the temperature drops and the wood contracts the liquid is forced out of the wood’s pours. This is called a cycle: nature provides around four cycles per year due to seasonal changes. Some distilleries artificially heat their warehouses to increase the number of cycles, so giving the spirit more flavor and color. These cycles cause interaction with the wood allowing a spirit to extract flavorsome chemicals from the cask known as wood derived congeners.

How casks are made for aging all kinds of wines and spirits can be seen in the below video. Kelvin Cooperage in Lousiville, Kentucky makes new casks and repairs and restores older casks in a similar way to the way casks have been made for hundreds of years.